My middle son didn’t die in a single car accident.  There were 2 accidents that rainy Monday morning.  He lost control of his car on the slippery, dark highway, spun around across 3 lanes from the outside lane and hit the guardrail outside of the inside lane.  The investigating officers decided he was probably just fine at that point.  But when he hit the guardrail, his car was thrown back into the fast lane of traffic.  The car just behind him swerved around him and missed hitting him.  But the next car didn’t see him in time and hit our son’s car, which was sitting at a dead stop, at a minimum of 77 miles per hour (according to the police report).  He didn’t survive that impact.

Someone hit my son’s car.

Another person driving into work that morning hit my son’s car and caused his death.

That person walked away from the accident with a few bruises.

My son died a horrible, violent, painful, I’m sure, death.

I was in such shock the morning the officer told me the details of the accident that it didn’t register that someone else was involved in my son’s demise.  I remember sitting at our dining room table, the officer on my left, staring at the table, not really hearing what she was telling us.  I remember our oldest son, sitting on the floor across the table from me, asking a question about it, but I can’t remember what the question was.  I just remember wishing my children weren’t hurting like I could see they were, but I couldn’t bring myself to lift my head or my voice to comfort them.

A day or two after the accident, an officer asked someone in our family to come clean out our son’s car.  Horror of horrors, my other two sons decided they should go do it.  I cried and prayed for them the entire time they were gone, knowing this was something no loved one of a deceased family member should ever have to do.  Our sons came back to our house after they finished and our oldest told us about it, leaving out the details he thought would upset us.  I’ll never forget him telling us that the attending officer told him the guy who hit our son was “pretty upset” and had asked about the family.  Our son immediately told the officer to tell him that he forgives him.

The man who helped end the life of his brother and best friend.

I was so proud of my oldest son.  And I understood the need to tell this man he is forgiven.

I cannot imagine the daily – momentary – horror of living with knowing you were involved in taking another human being’s life.  The life of a son; a brother; a friend.

I, too, felt the need to tell this person that I forgive him.  It was a desire of my heart to speak with this man from the very beginning of our nightmare, though it took me awhile to know the reason behind the desire.  It seemed I innately knew this man needed to hear he was forgiven.

We hired a lawyer a few weeks after our son’s passing; we needed help sorting through the many legal aspects of losing an unmarried, young adult son with no will in place.  I expressed to this youngish lawyer that I needed to speak with the man who hit our son’s car, but he refused to allow it.  I understood that, but didn’t appreciate it.  I also expressed, on more than one occasion, that I needed to see our son’s medical report, and  he refused that.  I sort of understood, but, again, didn’t appreciate it.  It wasn’t his call to decide what I could or could not see of my son’s reports.  This young lawyer made several decisions that directly affected my husband and I’s mental and emotional well-being, over the course of the 14 or 15 months we had to work with him.  These sometimes unwise and insensitive decisions made the grieving process more difficult and on-going than it should or could have been.

For many months, I had a very difficult time forgiving him for his words and actions.  I sometimes had to deliberately and decisively choose to forgive him, just to have some semblance of peace on a daily basis.

I have often marveled at this – my reactions to these two men – one who hit my son’s car and caused his death, and one who tried to help us, but said and did several hurtful things while doing so.

It is a gift from God.

It is sometimes readily available to the human heart.  But other times comes only after a great struggle.

God’s forgiveness of us came at a great price – the voluntary death of His only begotten Son.  This is a fact I treasure even more, after the death of my own son, than I did before it.

But forgiveness between us flawed human beings is sometimes easy and other times quite difficult.

After much pondering, analyzing and listening to my own heart, I came to the conclusion that I had been using my non-forgiveness, anger and even bitterness toward our lawyer to protect my heart against the reality of my loss.  I found myself shouting (in my mind) at him when my thoughts would drift to images of my son in his casket, or imaginings of him when the car behind him hit his car, or the hole left in my heart and my family as a result of his death.  I wasn’t even aware I was doing this until I let myself listen to my own thoughts when the onslaught of grief would come.

It was quite an effective way to avoid the pain.

But it was also damaging to my own health, peace of mind and relationship with the Lord.  And I don’t want that.

So, I forgave him and let go of the anger toward him and my desire to “set him straight”.

Letting go of this anger has made for a more difficult time of grieving, over the past year, but it has also set me free to lean on the Lord through the heart-rending times, instead of leaning on my broken and frail emotions.

After we finished up with the legal stuff and our lawyer was finished with us, I was driving around one afternoon in the general area of the residence of the man who hit our son’s car, when a white van turned a corner in front of me.  I know not everyone believes this way, but I do, so I’ll just say it like it happened – I heard the Lord tell me that that was the man I wanted to see and I should turn around and follow him to his driveway.

He was getting out of his van as I pulled up beside it.  I put my car window down and asked him if his name was………..and he told me it was.  I asked him then if he had been involved in a car accident on the date of my son’s accident.  He hesitated, took another couple of steps toward my car and said, “You’re the mom, aren’t you?”.  I said that I am.  The poor guy looked like he wished the earth would open up and swallow him at that moment.  A few more steps and he was at my car window, and I told him that I forgive him; that I didn’t hold anything against him, and that God forgives him, too.  We talked for another 10 minutes or so, and I learned he was a believer and prayed for our family often.  I was so relieved to learn he believed in God and knew forgiveness.  He, too, had suffered unimaginable, tragic loss – twice, in fact.  He told me he “knew” my “anguish”.  I appreciated that.

The older I get, the more thankful I am for forgiveness.

The forgiveness of God offered through His son, Jesus.

The forgiveness of others I’ve hurt, offended or sinned against.

The forgiveness God grants me the grace to offer others.

It isn’t an easy thing, sometimes.  But I believe it one of the most necessary things to receive and to give, if we are to live in peace and harmony here on this earth, and also if we are to receive life eternal. 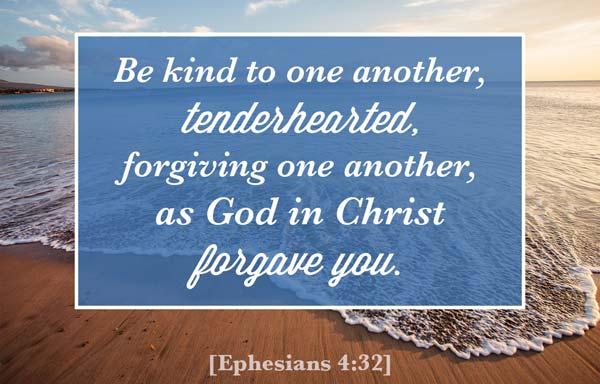 “Bear with each other and forgive whatever grievances you may have against one another.  Forgive as the Lord forgave you.  And over all these virtues put on love, which binds them all together in perfect unity.”  Colossians 3:13-14

And my personal favorite:

“The Lord is compassionate and gracious, slow to anger and abounding in lovingkindness.  He will not always strive with us, nor will He keep His anger forever.  He has not dealt with us according to our sins, nor rewarded us according to our iniquities.  For as high as the heavens are above the earth, so great is His lovingkindness toward those who fear Him.  As far as the east is from the west, so far has He removed our transgressions from us.  Just as a father has compassion on his children, so the Lord has compassion on those who fear Him.  For He Himself knows our frame; He is mindful that we are but dust.”  Psalm 103:9-13