I woke up this morning with a melody flitting around in my mind and it took me a little while to realize what it was.  It was the song, Word of God Speak, by MercyMe.  It instantly became the prayer of my heart, though with the scarce amount of time I’ve been spending in His Word, I feel like that might not happen anytime soon.  I keep my Bible open beside me on my desk, with the hopes I will spend more time in daily reading of it than I have for the past 3.5 years, but it usually gets only a few minutes of my time.  I’m working on right perspective regarding God and who He says I am to Him, and who He says He is to me, but it has been a struggle since my middle child passed away.  I don’t think anything shakes faith like the unexpected, tragic death of one’s child.  But I try…………everyday.  I pray, everyday, that God will help me to see who He is and believe in Him wholly, without reservation.  I believe He is doing just that, even when I don’t feel it.

This loss – the effects of it, the feelings that go along with it, the unwanted and unexpected changes that come because of it – seems to be going deeper into my husband and I’s hearts and lives this year.  Every year since our son died in a car accident has been different in the effects felt.  I think, in a way, this year has been one of the hardest so far.  Of course, nothing compares to that first year, and especially those first few months.  And maybe I feel like this year is harder because I have great expectations of one day feeling like I used to, before our tragedy.  And it is depressing to not ever feel that way………ever.  Part of getting used to having a son missing every. single. day. is learning to accept that life will never be the same as it was again.  There are so many disappointments, over and over again.

This coming Sunday is Mother’s Day here in the USA.  I don’t think I’ve gone to church on  Mother’s Day one time since our son died.  It is too painful to see and hear all the happiness and joy – and of course I am incredibly happy, joyful and thankful for the children I still have here with me on the earth – but Mother’s Day is just another reminder that one of my children isn’t here, and won’t ever be here with me to tell me Happy Mother’s Day, again.

I am reminded of 2 things when I think of Mother’s Day since our son died.  The first thing that comes to mind is the day we (our family) cleaned out our son’s apartment 3 weeks after he had passed away.  It was probably one of the most difficult things I’ve ever done in my life.

After our initial few minutes of trying to catch our breath after we entered his apartment, we all set about in different rooms, cleaning, sorting and discarding some of the things that remained of his life here on earth.  I went to his bedroom, and after lying on his bed, face-down, breathing in his unique scent, I started going through his chest-of-drawers.  I have to say, before I tell you what I found that day in one of his drawers, that I have a couple of messy kids and a couple of clean-loving kids.  This son was probably my most messy child.  He was like his dad is – he simply doesn’t see the mess, unless it is in the way of something he wants to do, or hinders a project in some way or other.  Knowing this about my middle son, his drawers, that day, were no surprise to me.  What I found in the 3rd drawer down was, though.  Stuffed in front of his t-shirts and jeans in that drawer was a slightly bent, unsigned Mother’s Day card.  Except for the bend in it, caused (I’m sure) by him shoving it into his drawer, it looked fairly new.  It was the end of October when I found it, so I assume it had been purchased for the previous May.  Not one of my 3 boys are comfortable expressing their feelings toward me, their mother, and they really, really do not like writing them out!  So, I was actually quite blessed that he had at least bought me a card and considered giving it to me.  I treasure the memory of finding that card, even if it was on one of the most horrid days of my life.

The second memory that comes to my mind as Mother’s Day approaches once again is of my two oldest sons on Mother’s Day a couple of years before our 2nd oldest son passed away.  There is just 19 months difference in their ages, and they were both incredibly competitive, and on this particular Mom’s Day it showed more than ever before.  I think it was the first Mom’s Day after our middle son had gotten out of the Navy, and these 2 sons were living together in the small house our oldest son was renting at the time.  They came to our house together in our oldest son’s big ol’ 4-wheel drive pickup – you know the kind that you can hear coming a few blocks away – and they both jumped out of the truck as soon as it was shut off, each holding a giant bouquet of flowers, both jockeying for the position of reaching me, standing on the front porch, first.  Of course, our oldest was in front, as per usual.  He was always bigger and faster than our middle son.  Their bouquets were almost identical, with only slightly different coloring making each unique.  But they both screamed, “Mine is biggest and best, isn’t it, Mom?”!  I loved it.  It is one of my most cherished memories of my two oldest sons trying to outdo each other in impressing me!

The only picture I have of my sons bringing me flowers that Mother’s Day is in my memory.  But here is a picture of my grandson, my oldest son’s son, that reminds me of that precious day a few years back.  He was supposed to be giving me the flowers for Mother’s Day, and it looks like he is.  But actually, he was using the flowers like BamBam in the Flintstone’s Cartoon, and whacking them on the concrete!  It took a little cajoling from his daddy to get him to give them to me! 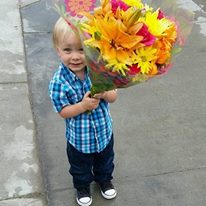 Writing about these 2 memories has caused my mind to wander through the many years of happy Mother’s Days in the past, and I can’t help but smile as I remember how my husband always had each of our children buy or make me something for this holiday.  He always had them come to wherever I was – usually in the bathroom trying to get ready for church in between getting children ready for church – and each gave me their little treasure and told me “Happy Mother’s Day, Mom (or Mommy, depending on their age).”  I can still hear their little high-pitched voices, one after the other, telling me that.  It is a beautiful memory that brings tears to my eyes.

The words to the song I mentioned in the first paragraph have given me great encouragement today.  Once again, I am reminded that I don’t need to do anything but believe.  God will do the rest.

Lyrics to “Word of God Speak” by MercyMe

“Jesus answered them and said to them, ‘This is the work of God, that you believe in Him whom He has sent.'”  John 6:29

“For I am confident of this very thing, that He who began a good work in you will perfect it until the day of Christ Jesus.”  Philippians 1:6

“……work out your salvation with fear and trembling, for it is God who is at work in you, both to will and to work for His good pleasure.”  Philippians 2:13

“But the word is very near you, in your mouth and in your heart, that you may observe it.”  Deuteronomy 30:14