Dan and I and our four remaining children all know what we are talking about when we say “that week”.  There is one horrific week in our lives that stands out with stark pain compared to all the other weeks of our lives.  I don’t remember a lot of that week.  In fact, I mostly remember the pain, the tears, the tears of my husband and children, the confusion and horror on my children’s faces, the disbelief and the busyness of trying to prepare for a funeral that we couldn’t believe we had to prepare for. My children took care of almost all of the preparations for his funeral; for their beloved sibling’s funeral.  I don’t know if they just instinctively knew we, my husband and I, couldn’t do it, or if they saw something on our faces that told them we couldn’t do it.  I didn’t know I couldn’t do it until I realized they were taking care of everything.  It was a most amazing and gut-wrenching thing to watch my children take care of all the preparations for his funeral.  It was my first encounter with what felt a little like role-reversal.  Well, my first encounter, if you don’t count my children telling me, their directionally challenged mother, which way to turn to get somewhere I’ve been many times before. That always felt a little like role-reversal, too, but I appreciated it so much I was still able to keep my dignity when they did it.  I think my oldest son, Joe, was only about 9 or 10 years old the first time I started to make a wrong turn to get us back home from somewhere I’d been many times before, and I heard him from the back bench in the van clear his throat and say, “Um, Mom……go right!”  Of course, I was like, “No way!”  “Yeah, Mom.  Go right!”  Dangit!  He was right!  They are all more sound on their directions than I am.  It’s embarrassing!  Anyway, my more directionally sound children took over as our caretakers the week between our middle son’s death and his funeral.  It was amazing to watch them be the adults I know them to be, but gut-wrenching to have them have to care for details I would normally be the one taking care of.  I spent a lot of time that week in a fog, staring off into space, crying and following orders from my children and husband.  The shock and grief were so deep I think it was few days after his death before I could swallow or felt like I was breathing;  we hardly slept at all and we all felt like we had a constant knot in our stomachs.  I think it was a few days after his funeral before the knot in my stomach began to soften a little, and it was a great relief.  It still comes back sometimes, but the heartache has never lessened.  The fact that my amazing children took care of almost all of the details for our son’s services is the most “positive” thing I remember from that week. But, there are many little things I want to remember from that week, things that could easily be forgotten in the midst of dealing with the relentless pain.

One of the things I want to remember was a comment made by the nurse who called, the afternoon of his passing, to tell us we could come see his body.  After she offered her condolences and explained some medical things to me, she asked me if we wanted to come see him, and then asked me if I had any questions for her.  I couldn’t think of any besides wanting to know if he had died peacefully, so I asked her if he seemed peaceful to her.  I don’t think she knew how to answer that, because she hesitated and murmured a bit before she said “yes”.  I think he was pretty much gone when he got to the ER, and she wasn’t sure how to tell me that.  But, after she told me he was peaceful, she said, “I can tell you this: He has the most beautiful blue eyes.”  I’ll never forget that.  Of course, I responded, “Yes, he does.”  I remember at that moment thinking, for the first time, “Do I say, ‘He does’, or ‘He did’?”  I still wrestle with that sometimes.  Do I speak of my son in the present tense, because I believe he still exists?  Or, do I speak of him in the past tense, so people will know that I know that he has passed on?  It seems, at times, like a tricky question to me, and I’m not sure of the answer.

Another beautiful, but painful memory took place the morning after the morning he died.  My husband is one of the most loving, caring, generous and forgiving people I know.  But, he has been extraordinarily all of those things since our son died, especially toward me.  I don’t think I would be functioning as well as I am and have been for the past 8+ months if it weren’t for him.  That first night after our son died was an extremely difficult night, full of tossing and turning, pain so deep tears wouldn’t come, shock and horror caused by images of an accident I didn’t see.  But, in the early morning hours I finally fell asleep.  I awoke a few hours later to my sweet husband kneeling on the floor by my side of the bed with his elbows on the bed, gazing at me with the most loving look on his face.  For several seconds, I thought all was well.  I was captured by his love and felt peaceful.  Then, it all came crashing back into my memory, and I choked out, “It really happened, didn’t it?”  It is almost impossible to describe the look he got on his face when I said that – loving, sorrowful, supportive and empathetic all at once.  I knew at that moment that there was nothing he wouldn’t do to help me through this most horrific time in our lives.  But, there was nothing, short of holding me and crying with me, that he could do.  And, the crazy busyness of funeral preparations was upon us, supportive friends and family were on their way, and more food would be arriving soon.  So, despite the heaviness of the grief and the moment shared with my beloved, I got up and prepared for the day.

My husband grew up down the street from a cemetery that was by the railroad tracks, and he played there often as a child.  Our children also played there when they stayed with Dan’s parents when we were away.  I’d always assumed we would be buried there someday.  I certainly never thought of having to bury one of our children there.  After a few phone calls to various local funeral homes, our oldest daughter thought the funeral home in our hometown was the friendliest and most sympathetic and accommodating, so she made an appointment for us to visit them.  While there, we decided on the dates and times for the visitation and funeral, worked on the obituary, picked out his casket, got a list of things that needed to be done to have a funeral, and made an appointment to meet with the sexton to pick out a plot for him in the cemetery his daddy, his siblings and he played at as children.  Sitting with four of your five children as you discuss the details of your middle son’s funeral is a task no parent or sibling should ever have to do.  I want to say it was the most emotionally painful experience of my life, but that wouldn’t be quite true, because all of that week and quite a bit of the nine months since, has been the most emotionally painful experience of my life.  But, that day was extremely difficult.  My husband, who knows me better than anyone but God, was so supportive, even though he was dealing with the same grief we all were, yet he was able to be so sweet and kind and gracious to me when we were faced with the most difficult task of picking things out for his funeral.  I kept asking him if this was ok, or that was what he wanted, and he kept saying, “I want whatever you want”.  I think we sat around a table and discussed many things that first visit to the funeral home, but I remember clearly the things I picked out to try to give a picture of who my son was to those who came to his visitation and funeral, but didn’t really know him.  The guest book I picked out had an eagle on the front and on every page, along with the American flag.  I remembered picking out Izzy’s high school graduation announcement with him, and clearly remembered how much he loved the one with a soaring eagle on it.  The guest book reminded me of that sweet day six years before.  Izzy was a very patriotic American, and was proud of the four years he served in the Navy, so the American flag on the guest book, and also on the programs, was a tribute to his patriotism and his service.

After picking out the guest book and programs, we were directed to a separate room with probably 25 or so sections of caskets and were told to pick out a casket.  I remember scanning the caskets and wanting to tell everyone to “shove it where the sun don’t shine” and run from that place.  But, I didn’t.  It took me all of about three minutes to settle on the casket I “wanted” for him; it was one with the color name “gun-metal gray” under it.  My son loved his guns.  When he and his brothers were in their late teens they purchased shotguns for themselves, and made a shooting range in the south field of our property.  Izzy posted a picture on Facebook of himself lying on the ground with his shotgun in his arms, looking through the scope, getting ready to shoot.  He titled that picture, “Me and my sweetheart”.  I knew the “gun-metal gray” casket was the only one I could tolerate for him. 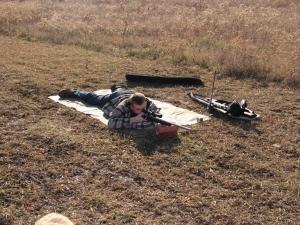